Here are a couple of Middle School/YA reads. One is a hauntingly beautiful story. I'm hoping I can come up with the words to do it justice. The other is a time travel with some romance. 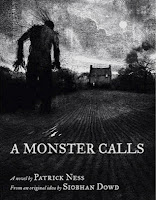 A Monster Calls by Patrick Ness, based on an idea by Siobhan Dowd, illustrated by Jim Kay

I knew I would love this book when it opens with the yew tree outside 13 year old Conor's bedroom turning into a monster that drags him out of his room, but he is nonplussed because this monster is not the scariest thing he has to deal with. Conor's mother has been fighting cancer, and everyone around him is waiting for the end, while she is trying everything she can to fight. Conor is haunted by nightmares that make giant clawed trees tame. He feels isolated, because no one around him knows how to talk to him. Except for a Monster.

Beautifully written and illustrated, it's also heartbreakingly real and true. I've been Conor and this story just resonated deep within. Also, the illustrations are not "beautiful" in the sense of full color glossy portraits, but that they fit so perfectly in the story and enhance it.

This book illustrates what happens when you learn that life is not fair, that the truth hurts, that sometimes we need lies to deal with the truth, and that healing has different meanings.

The obvious person in need of healing (in this case a dying parent) is not the only one.

This is not an easy read, but it is one that I believe should be read.

I'm kind of happy that the last two time travel books I read did not give me visions of unspeakable paradoxes, nor did they make my head hurt. Gives me hope for finding more time travel stories.

As far as Ruby Red, the pacing was fairly quick, although it still seemed to take a long time to get anywhere. For the most part I liked the side characters, especially Lucy and Paul, and I hope they get fleshed out more. I thought that the main character, Gwyneth, was pretty realistic (almost annoyingly so), but her reactions felt natural. It was an easy book to get into and finish.

However, I felt like it ended just as it was starting to get good. I realize it's a trilogy, but I think I wanted a bit more oomph in the action or the conspiracies. The romance angle felt off to me, to the point where I almost hope in the next book we find out it was a lie. Gwyneth did annoy me a bit in places, but I think that is more the adult in me talking, so younger readers will likely not have the same issue. I also thought the male lead was too 1-dimensional. I hope he gets rounded out a lot more in the next book.

And when I get down to it, yes, I will read the next one. Although I'm really hoping that Lucy and Paul play a bigger role in the next one.
at 9:22 AM No comments:
Email ThisBlogThis!Share to TwitterShare to FacebookShare to Pinterest
Labels: kid's books, review, YA

We have a new UF series, a Middle Eastern fantasy from a new author, I finally read book 1 of a fairytale-inspired Princess series, and there is the final book in a favorite paranormal steampunk  series.

If you've read any of my Romance reviews before, you know that I'm more a fan of the action-packed Romance (preferably with big bads, magic, gadgets, and so on) than the introspective "If they could only give voice to their true feelings" Romances. To each their own. I'm an action-junkie and it shows. Today I have two book 2's, one a Steampunk Adventure-Romance, the other a Romantic-Suspense.

Read more »
at 9:21 AM No comments:
Email ThisBlogThis!Share to TwitterShare to FacebookShare to Pinterest

...Stellar Four! I'm talking about how later YA Dystopian heroines paved the way for me to love Katniss from The Hunger Games. Yes, I finally joined most of the rest of the reading world and read the book.

I'm going to be a regular poster over at Stellar Four, but I'll still be doing my reviews here (and Goodreads, and Amazon - just like normal). I've admired the brilliant and funny women over at Stellar Four for awhile now, so it is an honor to get to join in too.

at 10:46 AM No comments:
Email ThisBlogThis!Share to TwitterShare to FacebookShare to Pinterest

Reviews: 2 Shorts and an Antho

So, you know I love short stories. Sometimes, when I have just a bit of time, I like to read a novella versus just reading a tiny bit of one of the books I have on the pile. It's a little break, and I like it. I also like reading anthologies, not just because many of my favorite authors contribute stories, but also to get a taste of an author I haven't read before. Today I have a novella featuring one of my favorite supporting characters, an interesting short with dragons, and an anthology featuring some kickass women, monsters and guns.

Note: I usually don't give a whole lot of story details in my reviews, because, well, I think that's part of the fun of reading a book. When it comes to shorts, I give even less story info - otherwise I'd give away all the good stuff!

Last time, I listed some YA Dystopian/Sci Fi reads. This time it's Fantasy's turn. I have 2 book 2's - although one of them could just as easily be a standalone. I also have a book 1 in a new series.

Read more »
at 4:26 PM No comments:
Email ThisBlogThis!Share to TwitterShare to FacebookShare to Pinterest
Labels: review, YA

Continuing on in my quest to catch up on reviews, here's some recent YA reads. I ended up with quite a few, so I'm splitting them up. First, here's 2 Dystopians and a Sci Fi. In a later post, I'll have some YA Fantasy reads.

Read more »
at 2:42 PM 2 comments:
Email ThisBlogThis!Share to TwitterShare to FacebookShare to Pinterest
Labels: review, YA

Let the review updates continue! Today I have a time traveling Fantasy, an Urban Fantasy featuring people with superhero powers who are not very "heroic," an Austen-esque Fantasy with magic, a thrilling book 4 in an Urban Fantasy series, and a Steampunk retelling of one of Shakespeare's plays.