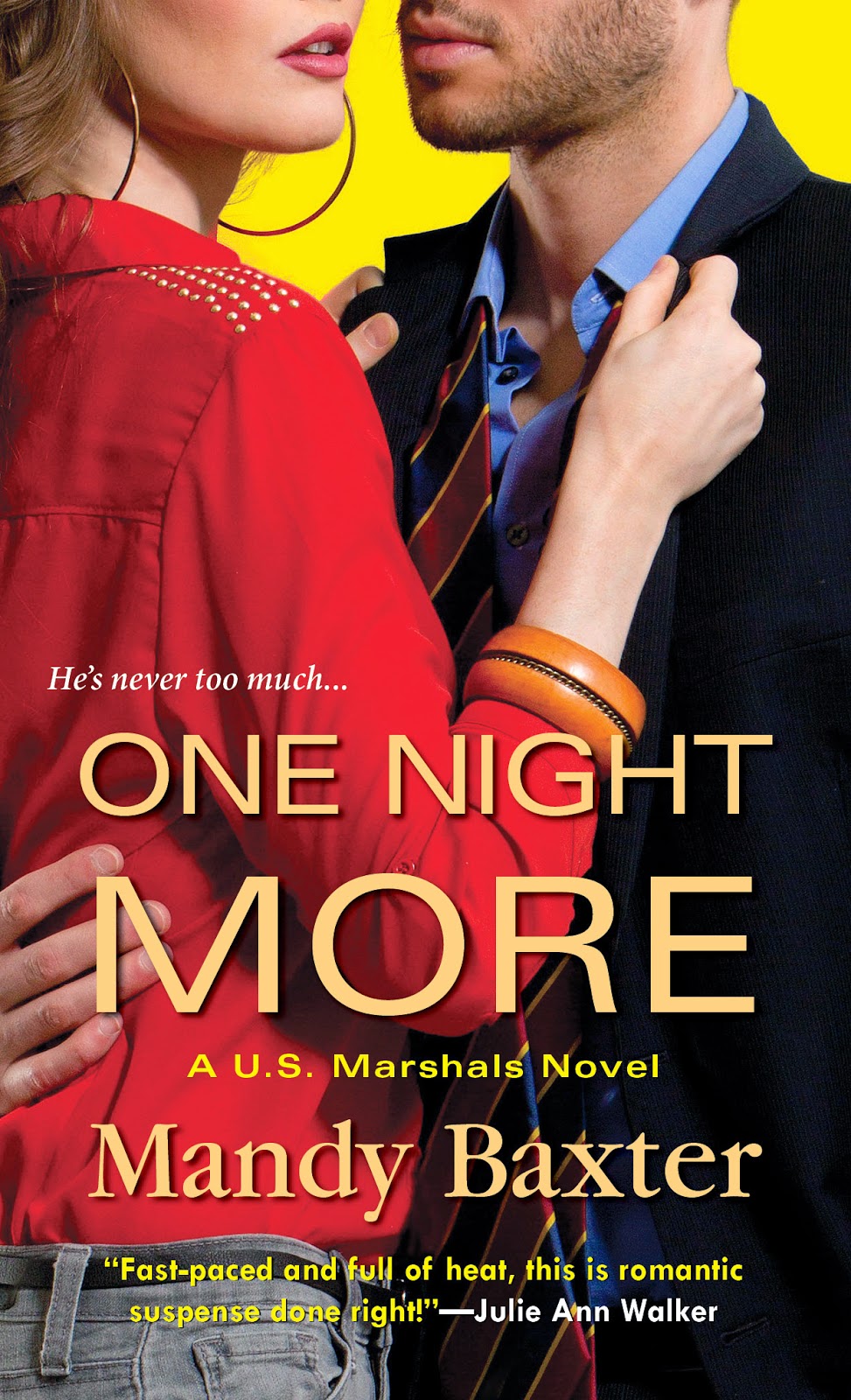 Today Mandy Baxter is here with her new steamy Romantic Suspense ONE NIGHT MORE. She's also sharing 10 things about her and has a GIVEAWAY!

The blurbage: "Savvy, hard-riding, rule-breaking—they’ll go anywhere and do anything it takes to protect and serve. But this U. S. Marshal has just met his match—and playing for keeps is one sizzling game…

Getting saved from disaster by a handsome stranger—Harper Allen has no problem with that. But when he leaves without a word or a clue to his real identity, the newbie reporter writes it off as the best one-night-stand she’ll never have again. Until a year later, when Harper comes face to face with the man assigned to hide her from a senator’s killer…

Galen Kelly hasn’t forgotten a single sensual minute of his night with Harper... or that she betrayed him. But with the FBI also on their trail, he’s got to pretend he’s never met her or risk both their lives. But as danger closes in, Galen may not be able to protect himself from taking the biggest risk of all…"

My take: This was a fun, quick read. You know I usually go for a few more monsters, aliens or fantasy elements, but this one had a lot of action which is generally what I look for when I read contemporary romance. True, there are some misunderstandings, but the dangerous situation as well as the believable trust issues kept it from becoming the annoying BIG MISUNDERSTANDING. It can be a tough balancing act, to keep the miscommunication at a level where it creates drama but doesn't alienate the reader.

Oh sure, I still had moments where I wanted to yell at both characters but thankfully it was at the same time the secondary characters were also admonishing our leads, so it worked out. It was also fast-paced, so the story moved along at a good clip. The burgeoning friendship and the adorable text exchanges were among my favorite parts.

I also loved the easter eggs. Like Harper, I too enjoyed Full Blooded. I also agree with her stance on Marvel superheroes and Supernatural. Like I said, fun read. It's also a little different from my usual reads, so it makes for a good palate cleanser between heavier fantasy works (I'm always on the lookout for those). I liked the supporting characters too, so I'll check out the next book in the US Marshals series.

Now it's time for Mandy to take over and tell us a few things about herself. There is also a GIVEAWAY, so check out the details below.


Ten Things About Me

I’m a rabid soccer mom/soccer fan.
Not the breaking kneecaps or sabotaging referees kind, though I have been known to shout “Go home, ref! You’re drunk!” on at least one occasion. Also, during the World Cup this summer, I might have jumped out of my chair at a local restaurant and screamed whenever Argentina made a goal.

I love the water.
Streams, rivers, lakes, oceans, even puddles. I love the sound, the way it smells. Everything. I even love rain. I once had an astrologer do my chart and he told me that I would always live near water. I think he’s right. I can’t imagine not living near a lake or at least a creek.

I’m a theater/musical/ballet nut.
Even as a kid I loved all things dance/music/acting. I took ballet and drama, sang in my high school choir. I’m lucky that the hubs is a theater fan, too. I can get him to plays and musicals, no problem. I’m still working the ballet angle, though. For those events, I’m usually flying solo.

My ultimate thrill is driving fast.
I’m a super nervous flyer, heights make me nervous, and I wouldn’t go parasailing for a million dollars. Okay, maybe for a million dollars, but I wouldn’t enjoy it. And whereas I’m not much of a thrill seeker, I absolutely love to drive fast. I used to own a Subaru WRX and the first year I got six speeding tickets. I could totally be a race car driver. Vroom!

I’m an animal person.
I love animals. Anything that’s furry, scaly, or covered in feathers is going to get a cuddle from me. I draw the line at insects, though. Particularly spiders. Just…no. We own dogs, a cat, chickens, ducks, and geese. I have a goose that loves to be cuddled and he puts his neck up for hugs. When I scratch under his feathers he throws his head back and howls. It’s totally adorbs.

I’m a canner.
I’m not super domestic but I am a food preserving fool. We have a garden and greenhouse and a very short season to get fresh fruits and veggies. So, in the fall, I’m freezing and canning said veggies and fruits. It’s time consuming, but I figure when the zombie apocalypse hits, I’ll be set!

I sing in the car.
And probably annoy everyone who’s ever had to ride with me. I’m not usually a shy car singer, either. Nope, I belt it out. My current favorite sing in the car song is Amnesia by 5 Seconds of Summer. It’s actually the theme song for my novella, ROCKED BY THE BILLIONAIRE that will be out in December. It was the perfect ballad for the story.

I dance around the house.
In the same vein of singing in the car, I like to bust out a move in the middle of my living room whether there’s music or not. My seventeen year old son particularly loves it when I try my hand at breakdancing. Hehe.

I’m an amateur carpenter.
More to the point, the hubs and I are. Most of our home improvement projects are DIY jobs. Last year we built our greenhouse and this year we’re building a covered patio out back. Next year’s big plan is a detached office for me with a cellar below. I totally think I need a pink tool belt.

I’m a sucker for 90’s grunge and alternative.
How I long for the days of the flannel shirt! It drives the teen and hubs crazy but my radio station is more times than not tuned in to Lithium on Sirius. Nirvana, Pearl Jam, Collective Soul, Nine Inch Nails, Smashing Pumpinks, Bush. OMG, BUSH!! 90’s Gavin Rossdale is my dream man. I could gush for hours about my fave 90’s music.

And there you have it! Tell me one or two interesting facts about you....

Comment below for a chance to win a copy of ONE NIGHT MORE (US/Canada only). Winner announced September 26, 2014.

Thank you so much, Mandy!

[received a review copy]
at 1:51 PM No comments: Links to this post
Email ThisBlogThis!Share to TwitterShare to FacebookShare to Pinterest 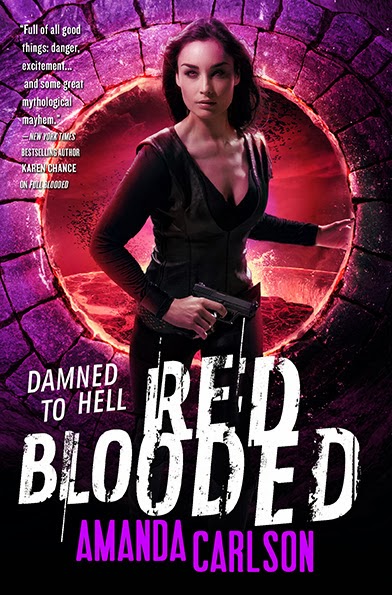 I adore this series. It is action packed, has interesting characters, supernatural politics and an ever expanding universe. We've been all over, the city, a mountain, high-flying road chases, vampiric New Orleans, and now Jessica is on a rescue mission to Hell.

If you aren't up to date on the series you might find some spoilers ahead.

We start this latest adventure with Jessica and her ragtag band of supernaturals in training with Tally, the head witch. At the end of book 3, Tyler, Jessica's twin, was kidnapped by the Demon Prince. Jess and company are planning a rescue mission to the demon underworld and need to be prepared for demon magic. Of course, things do not go as planned. Jessica's magic is something different and neither she nor the witches know how to handle it. Jessica finds herself thrown into the demon world on her own and has to think fast to avoid capture.

I am a sucker for stories set in the demon world (for example, Diana Rowland's Kara Gillian books) and so I was super excited to see how Carlson approached the Underworld. I was not disappointed. It was appropriately icky, creepy & oddly pretty in parts. This is also one of the more action-packed books, closer to book 2's level. As a whole, this series is action-packed, but these two books take it up several notches.

This does mean that it's lighter on the romance angle, but that's fine for me. I like that this is a mated pair that is not attached at the hip 24/7. Jessica has skills and also a lot of learning she needs to accomplish, like yesterday. I like that she has a partnership with Rourke, albeit one that is still new and still needs to be worked on, but Jessica is not a damsel in distress.

We also have more allies and villains. Jessica has been making all kinds of deals, some good, some perhaps not so good. The Fate theme is explored even more here, and I don't want to spoil anything, but I will say that when it was all said and done I'm really interested in the way this story is going. Many possibilities and more challenges, of course.

I also like that although in book one we mostly had the boys club with the wolf pack and Jess, more and more female characters have come into play. Some heroes, some villains, some who knows. It's the variety I like. Of course, my other favs are there too. Ray is quickly becoming all kinds of interesting. A total transformation from his start in book 1.

Jess has been on so many journeys, surviving, fighting, defending, rescuing, and all the while learning and getting a crash course in supernatural politics. This isn't a series where it's a procedural with a mystery to solve. It's more of a step by step progression of a character's journey from more or less ordinary to extraordinary, with all of the bumps, bruises, mistakes and triumphs that come with it. Can't wait to see what happens next.