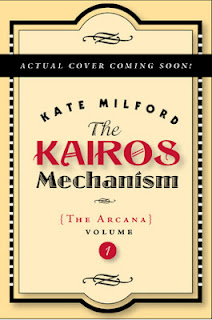 Today Kate Milford joins us to talk about The Kairos Mechanism, a Kickstarter project set in her Arcana world. The Boneshaker was one of my favorite reads from 2011, and I am eagerly awaiting The Broken Lands, out in September. I loved how the characters from folklore (good and evil) come to life. Just the right mix of fright, danger and adventure, with an excellent cast of characters. You also know me as a greedy little reader, so I want to get my hands on every story set in this fascinating world that Milford has created.

The Kairos Mechanism will be a novella featuring artwork by teen artists. I think this is awesome. Every now and then an author will put fan art on their blog and I marvel at the creativity. This is a great opportunity for us readers to get an excellent story and for young artists to get some experience and exposure. I'm also thrilled that the talented artist Andrea Offermann is working on the cover art - she also illustrated The Boneshaker and The Broken Lands.

I admit I am a complete and utter newbie when it comes to Kickstarter, so I am glad that Kate is here to tell us about how this project works.

Read more »
at 9:37 AM No comments:
Email ThisBlogThis!Share to TwitterShare to FacebookShare to Pinterest
Labels: interview, novella

There's going to be quite a few reviews posted over the next week or so. I've got a backlog, but I'm finally getting my review groove back. Today I have 3 short stories, 2 from existing series, 1 that is a standalone.

Passing the Narrows by Frank Tuttle
This was a good short story. It's one of those shorts where you are thrown into a situation and get to live through this one particular night with the characters.

Set in the South after the Civil War (in a world where magic was and is in use) where hard feelings run deep and a Yankee sorceress is pressing a steamboat captain to continue on to Vicksburg, even if it means encountering something very very bad and angry.

Loved the atmosphere and really enjoyed the characters.

Blindsight (Mirus #1.3) by Kait Nolan
I haven't read any other books in the Mirus series, so that's my caveat.

This felt more like a snippet than a complete story. That doesn't mean I didn't like it, and it did it's job as I was left wanting more. It just didn't have the same feel as a complete short story.

The world is very interesting, I liked the characters, and there is a setup here for a very good action-romance.

Nolan has a good narrative voice and I'll be checking out more from her.

The Abandoned (Graveyard Queen #0.5) by Amanda Stevens
Prequel to The Restorer, but honestly, I think it's better I started with The Restorer and then read this one. It was a bit too short for me, but does introduce some of the side characters/groups in The Restorer, and includes a little bit of Amelia (MC of the Graveyard Queen series) seen from other characters' POV.

Stevens does creepy well, and the atmosphere is fantastic. Her ghosts are not ones to mess around with, either. It is a good taste of what you'll get with the series.
at 11:21 AM No comments:
Email ThisBlogThis!Share to TwitterShare to FacebookShare to Pinterest
Labels: fantasy, novella, review

Real life has been keeping me on my toes. I do have some reviews in the works, just need some fine tuning time before I post them.

In the meantime, I'm reading Blackbirds by Chuck Wendig and The Taken by Vicki Pettersson, mixed in with some Kate Daniels by Ilona Andrews.
at 11:03 AM No comments:
Email ThisBlogThis!Share to TwitterShare to FacebookShare to Pinterest 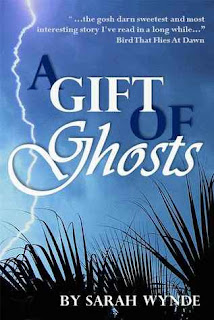 Sarah Wynde is here today discussing some of her experiences writing a book. I first met Sarah on Stellar Four during a discussion on eBooks. I've also read her first book, A Gift of Ghosts and enjoyed it (review to come soon, but I'll quickly say it is a fun paranormal romance). Today she is here discussing why she wrote her book and what it's like starting the next one:

In January 2011, a line of dialog popped into my head. “Chemists think sex is all about chemistry. Hormones and pheromones. Some peptides, a little oxytocin, and that’s the whole story. But what do they know? Really, sex is all about physics.” I could almost hear the breathless, slightly nervous voice of the woman who was saying it.

I wrote it down, of course, but it didn’t fit with anything I was working on. After about a decade of not writing except for work or school, I’d rediscovered the joy of writing fiction through fan fiction and was writing long, complicated, episode-like stories set in the world of the television show Eureka. Adding an original love interest in fan fiction? Not cool. So I put the idea away. Still, it lingered, just a little. Every so often, when I wasn’t immersed in some crazy Eureka plot (robot bats, human-plant chimeras, evil twins – so much fun!), I’d pull out the file and learn a little more about my heroine.

Then summer rolled around and the writers of Eureka started screwing with my favorite characters. I don’t mind bad things happening to the characters I love – that’s the nature of drama – but the writers were turning them into different people. The strong, kickass heroine I adored was becoming a wishy-washy emo princess. I was not pleased. When Syfy added insult to injury and cancelled the show, I was frustrated and angry and really, really sad. I decided it was time to write in a world that I could control.