The winner of the CURSED BY DESTINY giveaway is Kristen Heyl!

Congrats and thank you to Cecy Robson for the giveaway and to everyone who entered.
at 10:18 PM No comments: Links to this post
Email ThisBlogThis!Share to TwitterShare to FacebookShare to Pinterest

Review: Cursed by Destiny & a GIVEAWAY 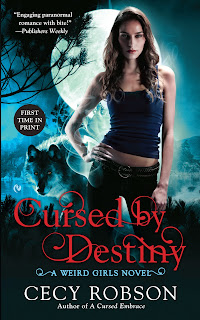 The Wird sisters are back in the third Weird Girls book, CURSED BY DESTINY by Cecy Robson.

The Blurbage: "Celia Wird and her three sisters are just like other 20-something girls—with one tiny exception: they're products of a backfired curse that has given each of them unique powers that make them, well, weird…

Celia’s a girl in trouble. Her heart is bound to Aric, but he is a pureblood were who must deny her or risk condemning his species to extinction. And that’s just her love life. She’s also been called to take down a group of demon terrorists looking to overthrow the paranormal world. (No pressure.)

In order to bring them down, Celia must ally herself to Misha, the master vampire who has made no secret of his desire for her.

And if that weren’t enough misfortune for one girl, a clairvoyant’s prediction could destroy Celia and Aric’s love for good. The only way to protect the world from unbridled supernatural terrorism is for Celia to bind herself to her destined mate. And that doesn’t appear to be Aric…"

Signed copies of SEALED WITH A CURSE and A CURSED EMBRACE from University Bookstore: http://www.cecyrobson.com/Autographed_Book.php

My take: I am trying to be as spoiler free as possible, but damn, Celia's life is in the crapper. I really, really hate the whole werewolf pack and the Elders. I'm thinking Bren had the right idea of going lone. Yada, yada, save the earth, blah, blah, they still overall are such sanctimonious jerks.

OK, now that I've gotten that off my chest, we can go back to the rest of the review. The action was awesome, as always. That has been a hallmark of this series from the prequel novella and I was not disappointed. Nasty adversaries and there are prices to be paid. You can't fight a war without casualties. I'm still reeling from everything that happened.

I love Celia and her sisters - that has consistently been my other favorite part about this series. Their relationship has changed a bit, but is still strong as ever. Now that we've gotten a Bren novella, I'm hoping we'll get a story or two featuring one of the other sisters.

Misha is much the same, but would you want him any other way? I liked how Celia had to train. Her powers are growing but she has to work for it.

Now, the other "destined" mate? Not on my happy list, but that's OK. I like how things were handled with him.

I'm really, REALLY wondering where this is going to go next. It's not necessarily a total cliffhanger, but there is a solid punch of a reveal at the end. Some of it I expected, true, but to end on it, just WHEW!

I will most definitely be reading book 4.

Now to the GIVEAWAY! Cecy is giving away a signed copy of CURSED BY DESTINY, a magnet, lip balm, and bookmark. US only for US bloggers (sorry, but postage is through the roof!). What animal would you want to shift into? Just leave a comment to enter. If you follow Cecy on Twitter or like her facebook you get another entry. If you tweet about the giveaway, you get another entry too (just be sure you @kindleaholic). If you win on another blog, another winner will be chosen (it's just fair, ya know). Winner will be announced December 14.

A "Weird" Novella - A CURSED MOON 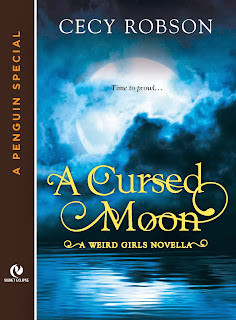 Cecy Robson's Wird sisters are back in a new novella out today, A CURSED MOON, but this time lone wolf Bren is in the cockpit.

The blurbage: "Meet the furry big brother that the Wird sisters never had…

Bren is a cocky, brash hound of a werewolf who loathes the idea of belonging to Aric’s pack—much less finding a mate. But Bren’s hotheaded behavior lands him in the doghouse when he defies Aric’s authority in front of his pack, bringing up a sore subject that’s bound to make the Alpha wolf’s blood boil…

Luckily for him, no one can stay mad at Bren and his wild charm for long. And when some frightening ghosts launch a hostile paranormal takeover, Bren will team up with Celia Wird to take down the evil ghouls before they hurt someone they both love…

Includes a preview of the upcoming Weird Girls novel Cursed by Destiny!"

My take: I had fun reading this one. When there is a 1st-person series, I do enjoy the occasional dip into a side-character's head, especially when said character is as brash as Bren. His mouth gets him into trouble more often than not, but he is loyal, and funny, and I liked seeing his different take on pack dynamics. We also learn more about turning someone and mates, which I enjoyed. Very fast-paced and good action too. I was surprised by the end, and I like the new doors that are opening up in this world. If you haven't read the first two books in the series, you will be spoiled and perhaps a bit confused. 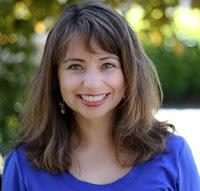 Cecy (pronounced Sessy) Robson is a full-time writer, registered nurse, wife, and mother living in the Great Northwest. A member of Romance Writers of America, she attributes her passion for storytelling to the rough New Jersey neighborhood she was raised in. As a child, she was rarely allowed to leave the safety of her house and passed her time fantasizing about flying, fairies, and things that go bump in the night. Gifted and cursed with an overactive imagination, she began writing in May 2009. Her Weird Girls Urban Fantasy Romance series is published with Penguin Random House’s Signet Eclipse and released to stellar praise from multiple reviewers including: Publisher’s Weekly, USA Today, and Romantic Times. THE WEIRD GIRLS: A Novella, SEALED WITH A CURSE, and A CURSED EMBRACE are now available. A CURSED MOON: A Novella, releases December 3, 2013, followed by CURSED BY DESTINY, January 7, 2014.