In the last post, I talked about some books I loved that were on the dark side. Ones that slap your emotions around for awhile.

However, sometimes I also want to just curl up with a story where I'm not worried that someone's getting tortured in the next room. A nice, cozy read where you don't need to leave the lights on at night.

Read more »
at 10:10 AM No comments:
Email ThisBlogThis!Share to TwitterShare to FacebookShare to Pinterest
Labels: fantasy, review

Some UF on the Dark Side

I like dark and gritty. Life ain't all rainbows and unicorns and I do enjoy a good read that jumps on that fact and rides it to the end. This time I've got a Noirish UF set in Vegas, and a road trip book that is not a pleasant excursion to the beach.

Read more »
at 9:27 AM No comments:
Email ThisBlogThis!Share to TwitterShare to FacebookShare to Pinterest
Labels: review, UF

I am getting really close to finishing my backlog of reviews (yay!), so here are 3 more. One is a UF, one a paranormal/steampunk romance, and one a YA.

Read more »
at 1:38 PM No comments:
Email ThisBlogThis!Share to TwitterShare to FacebookShare to Pinterest

It's a bit hard to believe that the Book Pile has been around for over a year. I started May 8, 2011 with an homage to Kate Daniels and here we are still.

May was a bit nuts for the KA family with the addition of a future fantasy reader to the group, but though it's been slow posting lately, I am very grateful that I still have this outlet, to talk with other readers about books and to find new reads. One of the best compliments I've ever received was that though they didn't always agree with my thoughts on a book, they did discover new books they wouldn't have found otherwise. That sums up why I started the blog, and why the Book Pile is still going.

Ordinarily, I would have a giveaway to mark the occasion, but as I'm a bit late on the whole blog birthday thing, I'm going to give it more time to percolate. Feel free to offer some ideas, but remember I am not made of money!

I've been slowly incorporating more interviews and guest posts and hope to have even more this coming year. A few of you have sent me e-mails with authors you'd like to see here. I'm working on it. If you have a suggestion, let me know!

Thank you so much for reading, for discussing books, for arguing with me when you think I'm wrong. I have had so much fun, and I'm looking forward to more!

And thank you for sharing your creativity with all of us.

I've read and loved a lot of Bradbury's stories, but one in particular will always stand out for me. 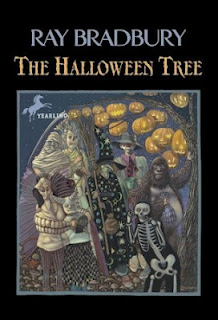 I first read The Halloween Tree when I was maybe 10 years old. It had been a tough year. My grandfather had passed away, then 2 weeks later my sister followed him. I remember my dad giving me this book, wanting me to read it. He said he thought I would like it.

I think he knew I needed it.

This might have been the first book I ever read where I felt a deep personal connection - a feeling that someone else somewhere had been dealt the same problems I had. A sense of camaraderie, all from the fictional characters in a book.

The theme of kids dealing with, battling with the impending death of a friend, a fellow child, was a very personal one for me.

There are many reasons why to this day books are a comfort and joy for me - this book is one of them.

at 9:08 AM 2 comments:
Email ThisBlogThis!Share to TwitterShare to FacebookShare to Pinterest

I liked this one a lot. It really drew me in quickly, and though it has many elements common in my usual UF reads (a killer, ghosts/paranormal element, potential love interest, family secrets) it still stood out.

Amelia is not kickass. She is not a fighter. She is physically fit given her work, but that's it. No martial arts or weaponry to be found. Amelia is a cemetery restorer who can also see ghosts. The ghosts in this world remind me of some of the Fae series where people with "the Sight" know there are Fae, but try to live like they can't see them to avoid unwanted attention. Such is Amelia's life - she avoids ghosts and haunted people because if the ghosts knew she could see them, they would latch on to her, leeching her warmth and life. Her only security is hallowed ground, where ghosts don't cross, which is why she loves restoring cemeteries as they are usually on consecrated ground.

A dead body is found at her latest project, bringing Amelia into the case and introducing her to Devlin, a cop she is attracted to but who is also haunted.

The romance is more of a slow burn and I'm glad that not everything is tied up. We get a resolution to the main case, but there is still a lot to be answered. Looking forward to book 2.

Loved the world - I have a soft spot for books set in Northern California. This one is set in Sacramento where there is a hidden Arcane world hidden from the normal, mundane one.

I really liked the mythology and how the author used the history of the place (Sacramento and the Gold Rush). I did not expect hopping zombie-vampires, but it works.

Characters were good, although Melina can be prickly and not always so smart. She's not a hotshot homicide detective - she is a Messenger, a human with some extra abilities who makes deliveries for those in the Arcane world, so I was OK that she was in over her head so quickly. She's not used to dealing with gangs, drugs, and murder.

The pace was fast, I enjoyed the other characters, there was a lot of action scenes, and overall I had a good time reading it. I'll be checking out the next one.

A Gift of Ghosts by Sarah Wynde

This is a fast-paced paranormal romance.

Akira sees ghosts. She tries not to interact with them because it never goes well. She also needs a new job since she's made a mess of her previous one. However her new job is nothing like she expected. First there is the very strange company town. Then, there are all of the ghosts she starts encountering. Her very handsome and charming boss wasn't part of the plan either.

I had a lot of fun reading this one. I liked how Akira and Zane played off each other. I enjoyed the other characters too, especially Dillon.

I liked the way the ghosts work in this world - there are opportunities for both good experiences and also dangerous ones. While the book was fun, it does come with some dark and bittersweet scenes.

One thing I would have wanted  was more interaction with the quirky townsfolk. We just get a tiny touch of this.

I'll be checking out the next book.

at 9:46 PM No comments:
Email ThisBlogThis!Share to TwitterShare to FacebookShare to Pinterest

Here are four YA reads that are on the darker side. I'd group them in with the older YA books. There's a killer nun, an ancient conspiracy, a plague-fueled dystopian, and a bloody ghost story.