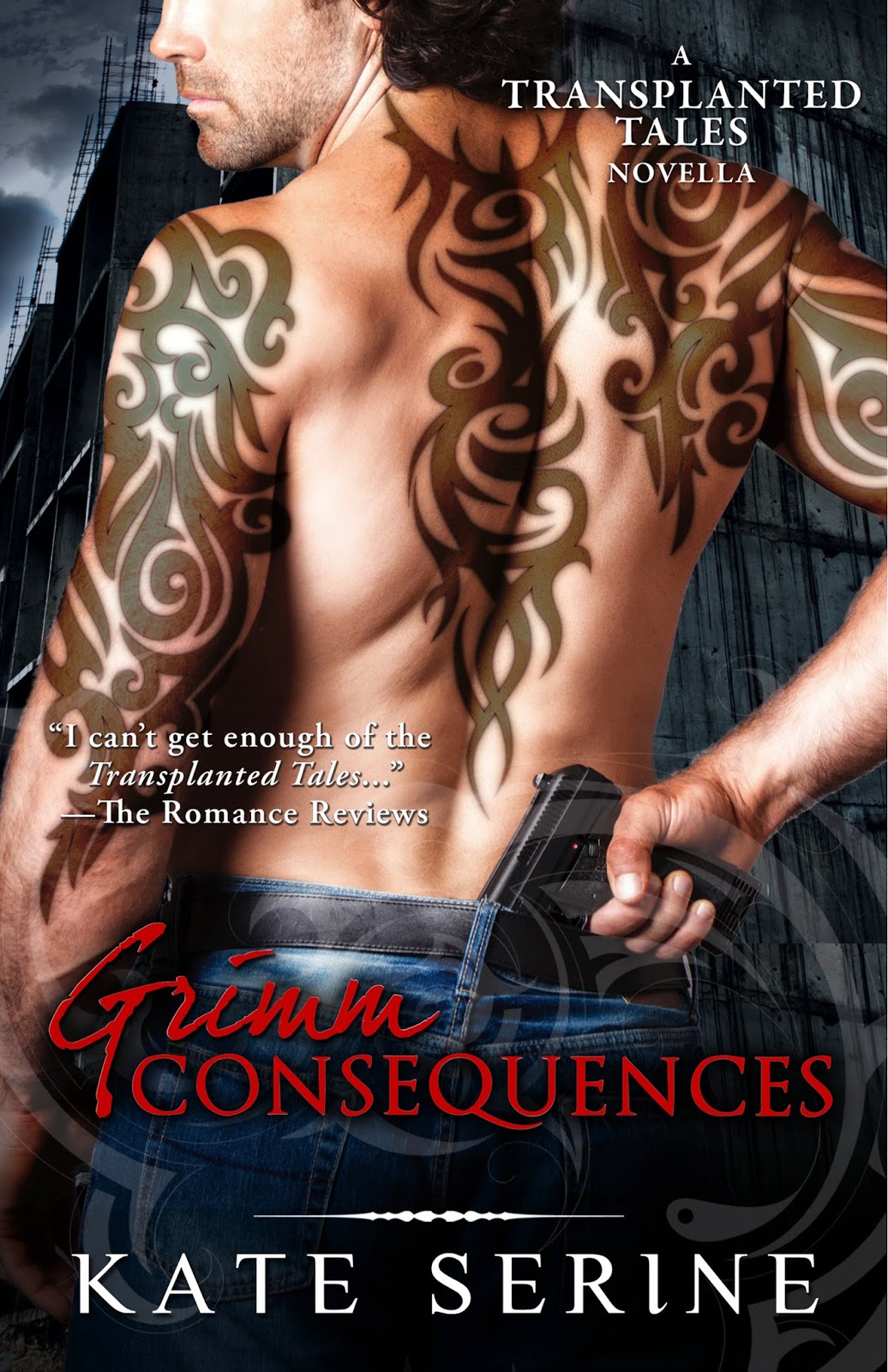 Kate SeRine joins us today as part of the GRIMM CONSEQUENCES blog tour. There is a GIVEAWAY at the end, so be sure to enter. Kate always has fun prizes!

I adore the Transplanted Tales series. Action, fairytales, romance and great leads, it keeps me coming back for more.

On April 17, you can grab the latest in this magnificent world, and get another story with the fabulous duo from book 1, RED. Set between books 1 and 2, GRIMM CONSEQUENCES is a novella from Nate's POV. We learn quite a bit more about his past and the consequences for all of the times he's saved Tess from death. Our stoic Reaper has kept quite a few secrets.

The blurbage: "You reap what you sow…

Saying Nate Grimm has a dark past is an understatement. Fortunately, no one’s bothered to look too closely at the Fairytale Management Authority’s lead detective and part-time Reaper. And that’s the way Nate wants to keep it. For after centuries of torment and loneliness, he’s finally found happiness with the hot and hard-charging love of his life, Tess “Red” Little.

Of course, his love for Tess is the reason there’s a posse of Reaper judges after him, led by a sadistic bastard acquainted with Nate from once upon a time. Now, Tess will pay the price for Nate’s transgressions unless Nate severs his ties to the transplanted Tales—and Tess—forever. His enemy has the advantage in speed, malice and brutality. But the Reapers have underestimated the depth of Nate’s love and devotion. And the fury of his wrath…"

It's a short, so I'm not going to give you a lot of specifics. There is a Reaper with a grudge, an escaped monster, and Tess learning more about the man in her life. Quite a bit of action (if there is one thing a Reaper is good at, it's kicking ass) balanced by the very sweet love between two of my favorite characters. Also, Death characters are up there for me with thieves - I love them. A quick read, but I'm glad we got a chance to revisit these characters.

There is also a taste of EVER AFTER (out in August). It's Gideon's book. GIDEON'S BOOK. 'Nuff said.

I asked Kate about her favorite side characters in her Transplanted Tales series. Maybe one of these will get their own book...

It’s no secret that with a series the secondary characters often take on a starring role in subsequent novels. And my Transplanted Tales are no exception. Lavender and Seth, Trish and Nicky, Gideon… They all made appearances in other novels before getting a chance at their own Happily Ever After. So as I celebrate the upcoming release of Grimm Consequences and look toward the release of Ever After, the question becomes, “Who’s next?”

Well, I certainly have my favorite secondary characters whose stories I’d like to explore if given the chance. Here they are, in no particular order.

It was Al’s genie who provoked Lavender Seelie into the magical duel that resulted in the Tales being transplanted into the Here and Now, so he blames himself and has vowed to make amends. To that end, Al has taken it upon himself to ensure his fellow Tales are safe and sound in this unfamiliar world, which means keeping their existence a secret and policing those Tales who get out of line. And, in the process of building a fully-functioning secret society among Ordinary humans, Al has sacrificed everything—his fortune, his marriage, his personal life. He is the job. There’s probably no Tale more deserving of a happy ending than Al. 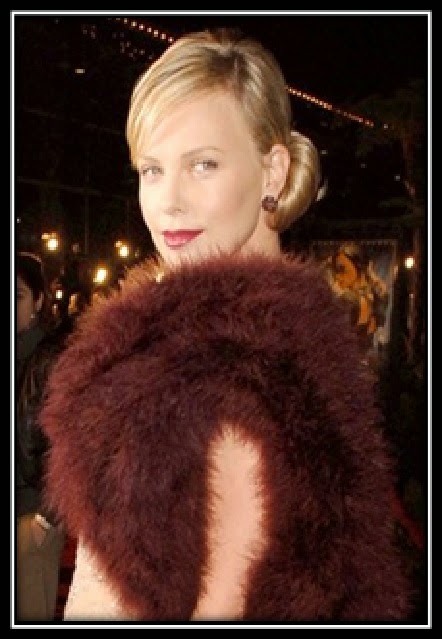 Mary “Contrary” Smith is a tough-as-nails, take-no-prisoners, ball-busting bitch who is a long-time frenemy of Tess “Red” Little. Although she and Red have come to an understanding, that doesn’t prevent Mary from turning her acerbic wit and bristly personality on other Tales who have the bad luck to find themselves in her crosshairs. That said, Mary’s not all thorns—especially when it comes to Al Addin, who she’s been in love with for years. But, of course, Al is totally clueless. 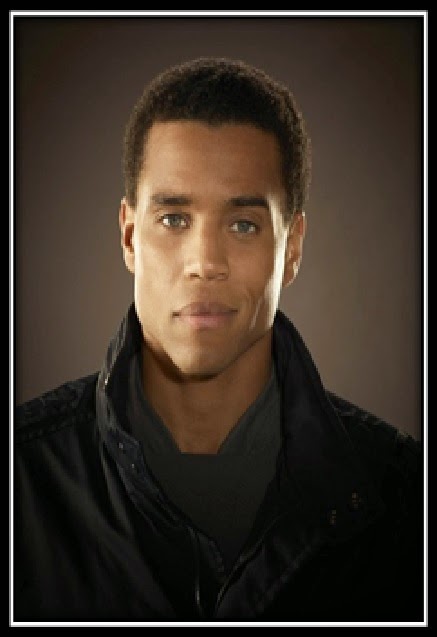 When you met Alex in Red, he was the FNG (F***ing New Guy) at the FMA, but he’s since earned his stripes, playing a large role in Along Came a Spider and becoming good friends with Trish Muffet. But Alex is a rare Tale—he doesn’t know his origin story. He’ll tell you that’s not such a bad thing for he has nothing to live up to and nothing to live down. But, as Nicky Blue once pointed out to Alex, “We all got a past, McCain. And it doesn’t matter a damn if you know what it is—eventually, it’s gonna catch up.” 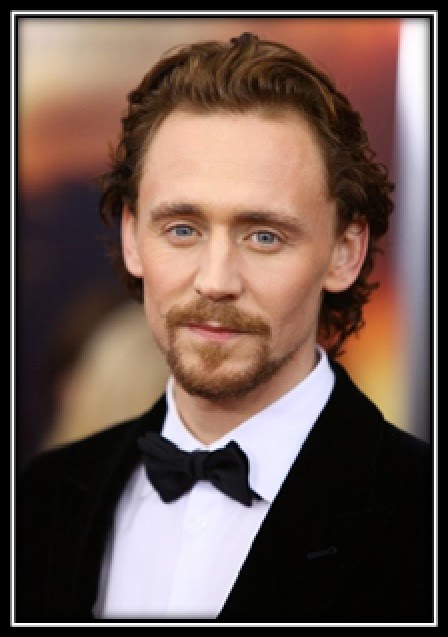 Yes, that Merlin. You haven’t met him yet, but you will in Ever After in August. And I have to say, I had a great time writing him! I don’t want to give away too much about my take on the legendary wizard, but I’ll tell you this—he may appear to be a cocky, sexy womanizer on the surface, but beneath his public persona, he’s extremely powerful and has an insatiable appetite for knowledge—and for one of Lavender Seelie’s sisters. He’s immediately captivated by Lily Seelie (also introduced in Ever After) whose keen mind and quest for knowledge are equal to his own. Not only that, but for the first time since coming to the Here and Now, he’s found someone who can resist his charms. And there’s nothing Merlin likes better than a challenge…

Now on to the GIVEAWAY! Fill out the Rafflecopter below. Thank you so much, Kate! 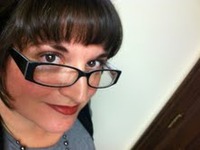 Kate SeRine (pronounced “serene”) faithfully watched weekend monster movie marathons while growing up, each week hoping that maybe this time the creature du jour would get the girl. But every week she was disappointed. So when she began writing her own stories, Kate vowed that her characters would always have a happily ever after. And, thus, her love for paranormal romance was born.

Kate is the author of the award-winning Transplanted Tales series, available from Kensington Books. She lives in a smallish, quintessentially Midwestern town with her husband and two sons, who share her love of storytelling. She never tires of creating new worlds to share and is even now working on her next project.

[received a review copy]
at 7:30 AM 2 comments: Links to this post
Email ThisBlogThis!Share to TwitterShare to FacebookShare to Pinterest
Newer Posts Older Posts Home
Subscribe to: Posts (Atom)