Review: Under the Empyrean Sky 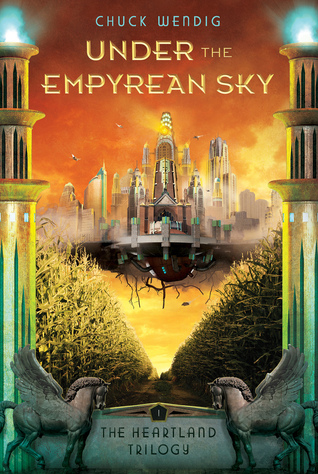 Under the Empyrean Sky (The Heartland Trilogy #1) by Chuck Wendig

I've read and enjoyed several of Wendig's adult books, so when I learned about this YA trilogy, I knew it would be on my list. I expected good action, interesting characters, and the author's unique approach to dialogue. Yes, Virginia, there are swears in these pages, but honestly, there were stronger words in Goonies (my earliest recollection of children swearing in film). There is violence, some graphic, and a sexual relationship that is not described in any graphic detail. Now that the housekeeping is attended to, on to the real big question: Did I like the book?

Yes, this was a good read. This action-junkie was happy, the story's pace was quick, the characters were multi-dimensional, the adults were not idiots (or at least, not all of them), and the main character, Cael, was believable. Imperfect, loyal, cocky, at first glance you might think that he is a trouble-maker with little care for his family, but that is not the case. He is driven by the constant warring between what he truly wants from life and his responsibility to his family and their place in the rather horrible Heartland.

The world is fascinating. Rampant genetic engineering of corn has decimated almost all other crops, taxed the land to the breaking point, and made everyone who lives on land lower than the dirt they stand upon. Meanwhile, the elite Empyreans float through the sky in their flotillas, living lives of luxury. The Heartlanders lives are heavily regulated. Your spouse is chosen by chance; you have no say in it.

Cael and his friends are the number 2 scavenging team in their town. The mayor's son is on top and will use any means to stay there. Cael wants to marry Gwennie, but he only has a slight chance that it will happen. His sister has run away again, his mother is deathly ill, and his father seems to have given up on caring for anything. Of course, there are plenty of secrets awaiting discovery, mistakes to be made, friendships to be tested, lives to fight for, and Cael's existence will never be the same.

I enjoyed the ride and will get my ticket for book 2.

at 12:23 AM
Email ThisBlogThis!Share to TwitterShare to FacebookShare to Pinterest