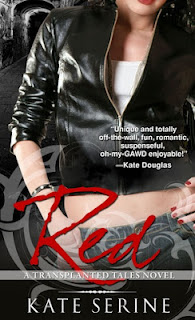 Tess Little is a Tale. Known more famously as Little Red Riding Hood, Tess came over to our world along with other fairytales and literary characters after a magical mishap (thanks to the magical muddlings of Aladdin's genie & Cinderella's fairy godmother). She is now an Enforcer for the Fairytale Management Authority (FMA). Then she gets called in to round up some suspects for a series of murders and is teamed with Nate Grimm - a Reaper who is also the FMA's homicide detective. Of course, wouldn't you know it, the suspects are all Tess's exes (Seth Wolf - yes THAT wolf, Vlad Dracula, and Caliban). There is quite a bit of action, secrets, betrayals, and a good share of romance too.

I like the idea of fantasy characters having to live in the Real World. I also can easily picture Little Red Riding Hood as an ass-kicker. I mean, her tale isn't one I'd want to be in, and Tess more than anything wants to be able to escape the legacy of her story. I really liked that different from other fairytale/real world tales, this one includes characters from great literary works, like Shakespeare and Austen. My little reader heart filled with glee when Tess's best friend turned out to be Elizabeth Bennett-Darcy.

I'm not usually surprised when I read, but there was one part that I expected to go another way and I was really happy with how it turned out. Of course, I can't tell you what it is. Read the book then we can discuss.

The book also touches a bit on the soul mate or binding theme, and I like the way it as used here.

And Nate, just yeah. He even cooks! I think I have mentioned once or twice my love of Death as a character.

This feels to me like a UF with a lot of romance. I enjoyed reading it and am looking forward to the next Tale.

[I received an ARC to review.]

at 9:40 AM
Email ThisBlogThis!Share to TwitterShare to FacebookShare to Pinterest