Heading Back Out on the Iron Seas

Meljean Brook's Iron Seas is one of my favorite romance series. In fact, the bar scene in Here There Be Monsters is near the top of my all-time favorite romantic moments. The world-building in this series is phenomenal. The action is intense. The women kick ass, and the men do as well. We've seen many different "types" of heroes and heroines in this series: Alphas (both male and female), adventurers, investigators, inventors, some experienced, some virgins (even the rare virgin hero). Each time I've felt like we've gotten a different kind of couple. It's not just the alpha-show 24/7, and I am thankful for that.

It's steampunk (so this review fits well with my own personal Steampunk Week). There are mechanical "bugs" that the Horde used to control conquered people, but in the new freedom from the invaders, the bugs help to repair injuries, give strength, and enable the grafting of mechanical limbs. We've also got airships and all kinds of mechanical creations. Oh and zombies, but not any of those in Riveted, the third Iron Seas novel. Seriously, the world sets this series apart. If you are a fan of epic, expansive world-building (and you like romance) you should try the Iron Seas. 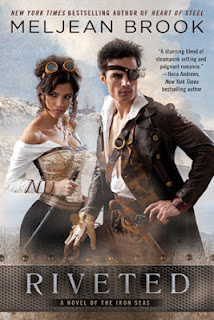 In Riveted, we're out of London and more in the New World, settled when the Europeans fled the Horde. Annika is a very "improper" young woman by New World standards. Of course, New World Social Rules make the Pilgrims look like swingers, so for the reader, Annika is a breath of fresh air. She wears bright colored clothes, speaks her mind, has an almost innocent view of the world (in the sense she isn't jaded), is searching for her sister, is a phenomenal mechanic. Oh, and she comes from a secret women-only village in Iceland.

We also have David, horrifically injured in a volcanic explosion that killed his mother, he has become a vulcanologist, an expert in volcanoes. He also has been rebuilt with mechanical legs, hand and eye. He is used to people, especially prejudiced New Worlders, shying away from him. He doesn't think he will be able to find someone who can see the man behind the mechanics. He is also searching for his mother's people. She also dressed and acted differently, much like Annika...

And there's your setup. We have an airship, madman (or two), a giant whale, and two people who are outsiders in the world, but kindred spirits.

I loved this book so much. The couple...it was just one of the most romantic Romances I've read that also satisfies my need for some action (not just of the smexy variety). Annika and David work so well. I also really enjoy that they become friends first. Brook hits all the right notes here.

That wasn't all, of course. Riveted even brings in LGBT issues and explores the need of being able to love freely without fear of physical violence or social condemnation. And this happened in a way that did not feel preachy. I am so looking forward to Scarsdale's book.

This also isn't an alpha-hero situation. Not that I don't appreciate the alphas, but I also really appreciate the male characters who exude strength, but don't necessarily need to be dominate.

I didn't feel there was as much focus on the world as we got in the first two books, but that felt right to me. The Iron Seas world is now established in my mind. There is still plenty of exploration, of course, and I can't wait for what we'll encounter next.