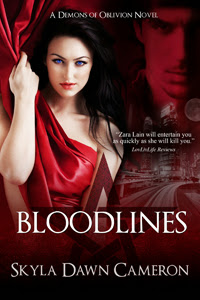 Today the Book Pile is a stop on Skyla Dawn Cameron's Demons of Oblivion tour.

I should have listened to Melissa (from My World...in words & pages) and gotten into this series earlier. She said I would like it and she was right. Snarky, kickass heroine, loads of action, some romance, and a very interesting world, I got sucked in and enjoyed the whole ride.

The blurb for the series:

"A diverse cast of characters come together in classic urban fantasy about monsters, the people who hunt them, and the occasional apocalypse. Snarky humor, magic with bite, nonstop action, a
dose of romance, and at its core: broken people finding family in one another.

Yes, Cameron is very good at the snarky asides. Here is the blurbage for book 1, BLOODLINES:

After three hundred years of unlife, narcissistic vampire Zara Lain has seemingly done it all, and she's now making a living as a successful thief-turned-assassin. Her newest assignment seems simple enough: kill the aging leader of the O'Connor coven and his only heir, and she'll have another ten million in the bank.

But in the dangerous world of the supernatural, few things are ever “simple.”

When a massive assault decimates the continent's population of powerful witches and warlocks, and its orchestrator has vampires being hunted down and captured, Zara realizes the tables have turned and now she'll be playing the hero. Forced to join with a smart-mouthed fellow vampire, a demonologist who's also a fan of hers, a recently widowed—and frequently brooding—warlock, and her best friend's mom, Zara's grudgingly willing to do what she can to save the day.

If only people would stop ruining all her outfits..."

I liked the world building. It is a huge world and there is lots that can be done with it. There is a huge shakeup that happens very close to the start. This will have lots of consequences down the line. I also liked the mythology.

Zara's vampire is a hunter and is fairly pragmatic about what that entails. I felt Cameron balanced Zara's snark and selfishness with the realities of an immortal "un"life as well as the events from her past to make her a well-rounded character you can sympathize with (but never pity) and root for til the end. I liked the other characters as well, but this is Zara's show all the way.

Lots of betrayals, Zara learns more about her world, and there is some steam too, but it fit with the character and the story. This tale is definitely not done and I want to know what happens next. It is a UF series with different protags (although Zara gets her turn in the spotlight again), so that is a little different. I'm looking forward to the next one.

BLOODLINES is free until November 1 for Kindle, so go grab it now!

The other books in the series are half-price until November 1 too.
HUNTER
LINEAGE

[received a review copy]
at 1:28 PM
Email ThisBlogThis!Share to TwitterShare to FacebookShare to Pinterest