Ever After Excerpt and Giveaway 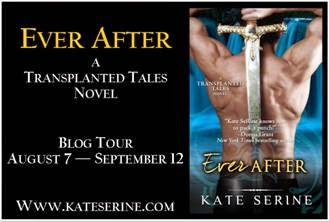 Today the Book Pile is a stop on Kate SeRine's EVER AFTER blog tour. This action packed fairytale/legend based series has been a favorite of mine since book 1. This time around we have a gender-swapped Robin Hood, Arthurian legends, the Seelie court, old friends, and one of my favorite supporting characters from books 2-3, Gideon. Kate has also given us an excerpt from EVER AFTER and there is a giveaway too!

Unseelie, the inspiration behind Little John, and Robin Hood's lover, Gideon has been in the service of the Seelie king since the day his love perished in a heist gone wrong. We've known him as the stoic, lonely knight in shining armor who has been a very helpful ally to our friends from previous books. Now he stars in his own tale and I am so very happy. Apart from the Nate novella, this is also a romance from the male characters POV only, something that is a bit different, but I really liked it.

Any time you have an abandoned love theme, it takes awhile to get on the side of the abandoner, especially when the abandonee is your only narrator. Arabella worked though. She had good reasons for what she did. Thankfully, there aren't any BIG MISUNDERSTANDINGS. Just hurt feelings and time needed to sort things out. It helps that Arabella fits right in with the kickass ladies of the Transplanted Tales.

I did like the relationship and of course the action. I also liked the introduction of Merlin. Another fantastic addition to a great series!

On to the GIVEAWAY! The blog tour prizes are: Grand Prize ($50 gift card to Amazon, B&N, or BAM - Winner's Choice); signed paperback copy of EVER AFTER, and Transplanted Tales swag. Also, two winners will receive an e-book copy of the Transplanted Tales novel of his/her choice. The giveaway is international, but the swag may differ slightly for an international winner due to shipping costs.

Now for the excerpt!


Excerpt from Chapter 6 of Ever After…

“Are you always this serious?” she asked, polishing off her chili dog. “You never used to have that perma-frown going.”

She was right, of course. I hadn’t been nearly as serious or severe when she’d known me. Not externally anyway. But what she didn’t realize was that any light-heartedness she’d witnessed had been more her doing than any inherent trait of mine. Her smile, her fearlessness, her brash eagerness to embrace every experience as an adventure—it was contagious.

And I’d craved it. Arabella had been a breath of fresh air to a dying man. Quite literally. The path I’d been walking had had only one destination. But she had offered me a detour that led me away from certain damnation and into her arms, giving me a glimpse of what the Ordinaries would call heaven. The memories of that happiness and the pure hell I’d experienced after I thought she’d died came back to me in a painful rush, making me wince.

“Oh, and there’s another scowl brewing, just there between your eyebrows,” she teased, wagging her index finger at my forehead. When I frowned at her, fulfilling her prediction, she gave me a playful smile, genuine this time. “Although, I have to say, you’re quite handsome when you’re worried about me.”

“Handsome?” I grumbled, letting her drag me along behind her. “I’d rather never have to worry about you and you think me repugnant.”

She sent a flirty grin over her shoulder. “Never happen.”

“You not giving me cause to worry? Oh, yes, I’m well aware that you take great delight in tormenting me with your antics. You always did.”

She laughed. “I meant, you’d never be repugnant to me—even if you were old and grizzled and all those gorgeous red-gold curls fell out, I’d still think you were the most handsome man I’d ever seen.” She abruptly stopped and spun around to face me to say something more, but having not anticipated her sudden halt, I slammed into her, my arms going around her to keep us both from stumbling. Laughing, she grabbed onto my jacket to steady herself.

I cursed under my breath and took a step back, putting her at arms’ length. “Sorry, lass,” I threw over my shoulder as I strode away, walking ahead of her now.

“Gideon!” she called, jogging to keep up with my long strides.

Fortunately, at that point we finally arrived at the hotel and casino where Merlin was staying and performing his act. I strode into the lobby, making a beeline for the elevator. As luck would have it, the doors happened to open just as I pushed the UP button. Not so fortunately, Arabella and I were the only passengers.

“I’m not gonna be just another one of yer games, Arabella,” I muttered. “Not this time.”

She pressed the button for the penthouse, then stepped directly in front of me, crossing her arms over her chest. “For the record, you were never a game to me. And you’re not a game now.”

I studied her for a long moment, wanting to believe her. “You have chili on your mouth,” I told her, avoiding the conversation about us.

She swiped at the corner of her mouth. “Gideon—”

“Bugger all…” She huffed and wiped the other corner. “Listen, I—”

“Oh, for fuck’s sake!” she grumbled, throwing her arms up in the air as we jolted to a stop and the doors opened. A man in a loud silk shirt started to get on, but Arabella threw a glare at him over her shoulder. “Take the next one.”

The guy grunted and started to get on anyway, but Arabella blocked his path. “Oi!” she snapped, giving him a shove back into the hallway. “Hop it, mate!”

As soon as we were on our way again, she turned back to me, her lips pressed together in an angry line. But before she could take the piss out of me, I cupped her cheek and pulled her toward me, wiping the smudge from the corner of her mouth, letting my thumb pass over her lips more than was necessary.

“There,” I said, my thumb now smoothing over her cheek as I marveled at the softness of her skin. “That should do it.”

She shook her head. “No. I don’t think so.” With that, she grabbed my jacket and pulled me down to receive a hard, hungry kiss. I wanted to resist her. I knew I should push her away. But I was far too weak. I kissed her back, lost in the sweet taste of her. I snaked an arm around her waist and pulled her hard against me, lifting her up on her toes. When she released me and took a step out of my arms, she closed her eyes for a moment. “I’m sorry, Gideon. I shouldn’t keep doing that, but—bloody hell, I’ve missed kissing you.”

I wanted to tell her how much I’d missed kissing her, too. I wanted to drag her back into my arms and capture her mouth again, show her just what we’d missed out on all these years. But I didn’t. I shoved my hands into my pockets to keep from peeling off her clothes right then and there and caressing every inch of her body, and took a step back, putting a safe bit of distance between us."

at 10:37 AM
Email ThisBlogThis!Share to TwitterShare to FacebookShare to Pinterest